this is what he said yesterday in the debate:

I started commuting—both regularly and frequently—from Forest Hill to London Bridge and Waterloo East in 1963. In all those 53 years, the service has never been as unreliable and as chaotic as it is today. I now no longer use Southern to go to London Bridge, as I use the overground service. Unfortunately, large parts of my constituency, and just about every other constituency of Members concerned about this matter, do not have that option. Many of my constituents blame the management for what is going on, and an equal number blame the unions. Another set blames Network Rail and the infrastructure. We have heard from the Minister today about track failures causing chaos on the Brighton line. When will he and the Government do something to reassure my constituents, and those of everybody in this Chamber, that the Government are actually trying to do the best they can for commuters, rather than leaving commuters to the fate of the most incompetent organisation in the entire UK rail industry?

Do I understand correctly that Southern is effectively being forced by the government to introduce this driver-only door operation which is the cause of so much of the disruption?
Top

Indeed you do. Unfortunately, the almost comically useless and most ideologically driven cabinet minister in living memory, Chris Grayling, is now in charge. He will back Southern to the hilt in driving through one-person operated trains, despite real concerns about safety of this operating mode on busy commuter routes, he has now effectively announced the start of reprvatisation of the infrastructure, and has blocked the plan for TfL to take over the Kent commuter services. The hapless Grayling destroyed the job centre network and massively expanded private sector involvement in the chaotic and cruel work capability system for disabled people as minister of work and pensions. As lord chancellor and justice secretary he was the direct cause of the present prison crisis by cutting prison officer numbers by a third and was responsible for egregious measures to impoverish the prison regime such as effectively banning access to books from outside the prison, restricting access to education, and volumetric control of prisoner's personal property. He also destroyed the highly-regarded and efficient probation service by privatising much of its work and and handing it over to useless "community rehabilitation companies" most of which are now going bust.

Grayling is utterly fixated on the privatisation of public services at whatever cost. I'm afraid that with Grayling in charge the prospect of a rational and integrated transport system for London is a pipe dream and services on the suburban rail network will continue to be an expensive and shoddy means of syphoning public money into the pockets of foreign investors like Govia.
Top

At least he spoke about something relevant to his constituents , full marks for that.

In the past he has raised some strange subjects.
Top

Now a letter has emerged from Grayling to Boris Johnson when the latter was mayor: 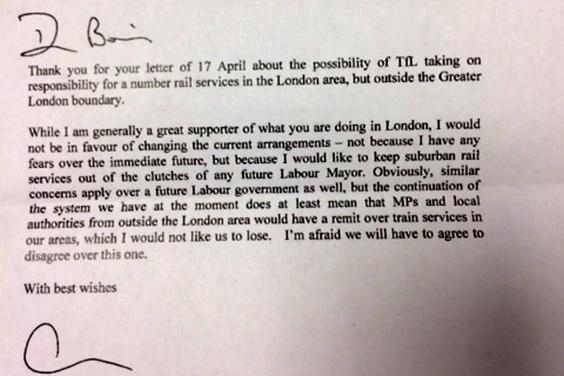 So good - that letter shows Chris G hasn't made his mind up yet then - still possible that he might be persuaded.
Top

Sparticus, you've missed out the major changes to the legal system Grayling introduced in terms of terminology. Some, I think, made sense, others not: replacing "minor" by "child", for instance, was not a sensible move in my book.
Top
Post Reply
8 posts • Page 1 of 1