Yes, they are Tim.

We advised See3 as advisors to the Mayor of London on high street regeneration on suitable sites (which is why the Kirkdale ones went ahead) and this is one of the sites we picked.

We had already designed something for there and got verbal permission from the Landlords.
Top

The Turdis is such a beautiful name for it. Very good point Lee. I can’t take on anything other than this project so any others want to transform a little bit of Sydenham - get onto Lewisham Council

Tim/Lee - as said I’ve been told permission has been given to another entity to do something with that particular location (which is a great location) so didn’t want to get involved in that and aside there would have been additional costs which would push the costing up and as relying on the local community/businesses I have no idea how generous people will be but a lower target for a more achievable goal sits well with me!

That's true. It would need scaffolding and a scaffolding license which could push the price up by about 50%.
Top

What about the ugly wall straight ahead at the bottom of station approach? It would make arriving at the station more of an event.
Top

That would need permission from TFL. We got permission for the sign we did for On The Hoof.

We were looking at this at one point, it would be a great place for public art to cover the ugly concrete panels.

There is currently an enamel sign there for the trains. Creating signs to reflect this sign in finish and size, mounted in each panel panels could look good. Each one wouldn't be that expensive (about £500 a panel) and last virtually (pun intended) for ever. We are designing a large enamel panel mural at the moment in West Drayton with Links signs. They can look great.

We used another company, AJ Wells, for some signs for a garage that are designed to look like old advertising signs such as Castrol etc. Both AJ Wells and Links Signs make the signs for London Underground (and probably did the one that is already there).
Top

I really like the idea of imagery on the spaces both at the end of the station approach and other places (like the bridge).

This particular project is for a single large impact piece based around high quality typography of Sydenham / SE26 / SydEnham26.

That particular location has less sightlines/visibility (it can’t be seen from the high street unfortunately) but would be great for perhaps more intricate pieces of art for people to look at (as previously mentioned by another poster) as they wait or if this becomes a location for stall/s.

If anyone would like to look into it/take it on, go for it (!), but the project I’m working on is for a single large lettered statement piece. If successful (fingers crossed) I may continue to look at other projects around artwork in the community or would happily pass on the information gathered and social media accounts for the next project!
Top

Agree about lack of visibility from the High Street.
Top

How visible would a station wall be from the high street? The Turdis must get in the way?

I still think this project would be most effective on the high level spaces. Can the previous group be asked if they are in a position to proceed? I know this option would be difficult to deliver, but it has the potential to be truly iconic. I would rather get the best possible result rather than a quick win.

Would we be able to get the scaffolding sponsored by a specific business? How about Nando's?!
Top

The station wall probably belongs to the infrastructure owner - and that is Network Rail (NR). They have been key in granting consent on other mural projects associated with their walls and bridges and would on this occasion be the first point of contact.
NR may consider that as this location is an approach to the station that they in turn may consult with the two operating companies - but that would be a matter for NR.
If the retaining wall opposite the down platform were to be included as a prospective site, NR would almost certainly be obligated to consult the two operating companies.
Top

It may be that further artwork at higher vantage points will take place and it may be that will be paid for by businesses or funded by a grant etc rather than another crowdfunder attempt?...

One of my thoughts/views for this particular project which I thoughtlessly haven’t mentioned outrightly is for it to be crowdfunded/voted by community and then viewed by the community/locals. One of the few disadvantages to the higher locations on the corner building (other than substantial increased cost with cherry picker and reduced ease of access re:prep/paint) is that a very small percentage of locals would actually see it due to its location.

Those that live on westwood hill and the few roads off (Lawrie park etc) would ses it, otherwise a large percentage (?) of locals would not see the sign as they would use the train and exit the station (either side) walking home without view of the signage.

During the meet in the pub, the idea of whether it was a community piece for locals to regularly see or a “gateway” piece (ie: welcoming people into the locale at a point such as the bridge near Bell green or coming over the bridge to the high street like the higher vantage location) for those who travel through was discussed and when taken into account all variables. Unfortunately not everything will be perfect to everyone’s wants/needs but if enough people like what the project is trying to do then it’ll happen, if not then guess it’s not the right time or someone else could do something similar to a different effect.

In regards to visibility from the high street. It is very visible (especially if it’s a large piece) and actually at the point where it begans to not be visible is roughly where the bridge ramps and then you have the small property world hut too so you begin to lose sight of the wall I think regardless of WC perhaps? Anyways, if/when the market starts up again it would be a lovely visual from the pocket square next to Lloyd’s too. Here are two pics of the location again for people:

And again a reminder that the spec/design likely to be aimed at a large typography type piece of work labelled “Sydenham” or “SydEnham26”. Examples of Lionel Stanhope and Survival Techniques work who hopefully will both be submitting designs:

Have a lovely weekend all!

Ps: one of the reasons I’m keen on doing things straightforward (including crowdfunding) is that there have been projects in the past that have have even received funding and permission with people spending time on them (eg: designing artwork) however they have not amounted to anything because of a number of reasons in part I gather because of the various parties/elements involved in the whole process.

I also think if Forest Hill can achieve something like this in a very similar way (I’m essentially using their blueprint) then why can’t Sydenham provided there is a need/want for it which happily there appears to be!
Top

Sorry to be a pain. I just feel that the proposed mural could be better. I love the design, but don't think it will look good on that particular wall. The first versions were done on walls with larger flat surfaces. Painted at the size you suggest, it will spread across several different panels, which would spoil the view from the main road. This site is so bright and prominent that it will matter, unlike the forest hill version under a bridge, where the murky gloom can only be improved!

Could the artist come up with a design that uses the panels as an asset, which frame his sign? Either a smaller version of the f h design or a new one; I think it would be much stronger, and enhance the historic structure.
Top

These are just examples of designers/designs with typography - when permission is granted (or not) then submissions will be welcomed and the actual designs to choose from will be put up. Lionel Stanhope (who is doing the FH one and is the artist in those first two photos) has already indicated that due to the surface he would not be able to do his “standard” design which adorns many SE areas at present. On the spec will be information/pictures for artists to view the location and to design from - I assume using the shape/surface to frame as you suggest. Will see what artists come up with and if the community like what they see! Thanks for the ongoing discussion/personal opinions and points that possibly have needed clarifying for other people too

Thanks JMLF, and congrats on all the great work you are doing. BTW I adore Lionel Stanhope's florid Brockley sign on the shop front. I look forward to seeing the demsigns.
Top

I don’t think station approach is the right spot either.
Station approach would look great with a living wall but other than that I think there are so many areas around Sydenham that need smartening up and TFL are responsible, so we already have a “throat to choke” for want of a better expression....
Top

You are to be congratulated on your progress.

Maintain the momentum - there is plenty of time to finesse and finalise design.

From the Forest Hill debate - it was quickly identified that awaiting better weather to carry out the works was also a key factor in fixing when the work could start. So whether the weather will be good enough in April, May or June will also be debated.
Top

On the Station Approach stretch of panels, it certainly does look an impressive site in your photo JMLF. During the day, doesn't the run of parked cars in front of them make a "distance" view impossible?

Well, aside from maybe some whmsical heads popping up above the panel inserts (and therefore visible above the cars) giving a cheery wave, or making the top of the wall the focal point. Very brain taxing for me, but I'm no artist.
Top

I don't think the parked cars matter and it's just a distraction. People walk in front of it too, buses drive in front of some murals.

Yes JMLF, go for it. The wall has some nice natural panels in it. Relevant, beautiful artworks in there could look fantastic and brighten up Station Approach.

This was a lovely project by the fantastic 'Bread Collective' called 'The Walls Have Ears' which celebrates the industrial past of Hackney: http://www.breadcollective.co.uk/the-wa ... kney-wick/

Sometimes cars are parked in front of them (but they are still lovely). 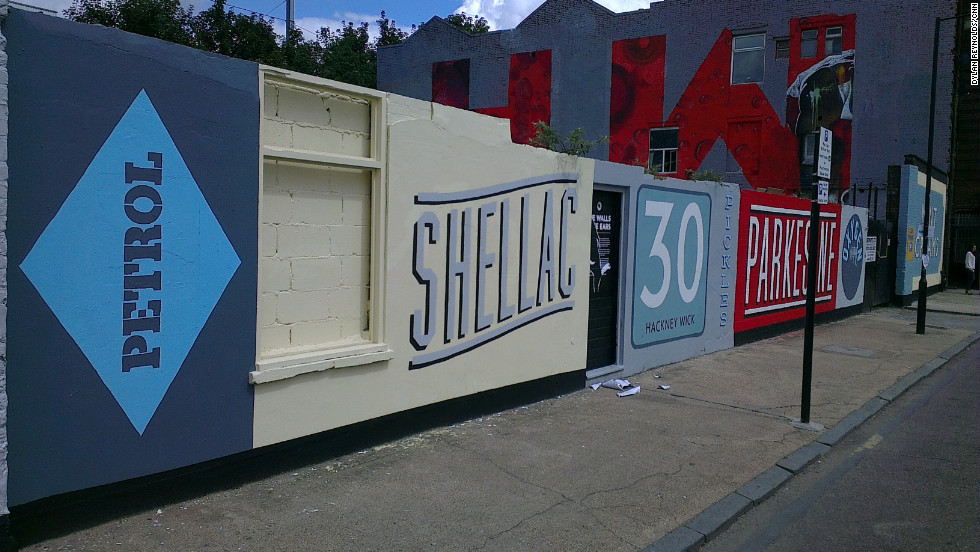 Mosy - from my recollection when I gathered info about everything the waiting time for cars there are meant to be no more than 20 mins and generally they are more empty then not also at peakish times when I’m to and from work daily.

Anywhere not up high has the likelihood of being obscured by something at somepoint, some more than most (eg:the bridge with fairly constant vehicles or the low wall next to the smaller station entrance which sometimes has bikes and appears to permanently have cars parked in front).

Will update everyone in next few days