I've been wondering for a while if there's any appetite for a dedicated pro-development open email list -- such as a Google group -- in SE26.

Recent discussions on here suggest there might people in the area who'd like to do more in encouraging development in our area - such as housing and flats, getting Nandos and the yoga studio to open up, or street improvements like the mural - and might be interested in working together on opening up the planning process, and potentially lending their voices to good ideas that will bring in new neighbours and investment.

The idea wouldn't be to create a rival to this excellent forum at all - but an email list might be an effective way to exchange information and views on individual projects, and relaying any shared position to the local powers that be.

What do people think?
Top

Why not just create a new dedicated forum on here rather than swamp everyone's already full inboxes. That way everyone can contribute if required and see the full discussion thread.
Email is not the idea medium.
Top

It would be good if Lewisham's restrictive rules on loft conversions could be relaxed! The rules in Lewisham are much stricter than other boroughs, so you can't have Juliet balcony doors or anything other than windows that look like the windows below and it can't come out the full length of the roof. That's really limiting if you want to create a functioning living space on a first floor flat - and that would be one way of creating more much needed affordable homes for people that need them.
Top

The Estates Gazette has an article

London residential refusals on the rise


However, the recent draft London Plan shows signs that City Hall has acknowledged too many small sites are turned down for planning permission.

For the first time, the plan set a target for small sites (those with capacity for up to 25 homes), including a presumption in favour of developments within 800m of a train station and with a Public Transport Access Level (PTAL) rating of between 3-6.

The plan states that local boroughs should “recognise in their development plans and planning decisions that local character evolves over time and will need to change in appropriate locations to accommodate additional housing provision and increases in residential density through small housing developments”.

Here it is, focusing in on Sydenham 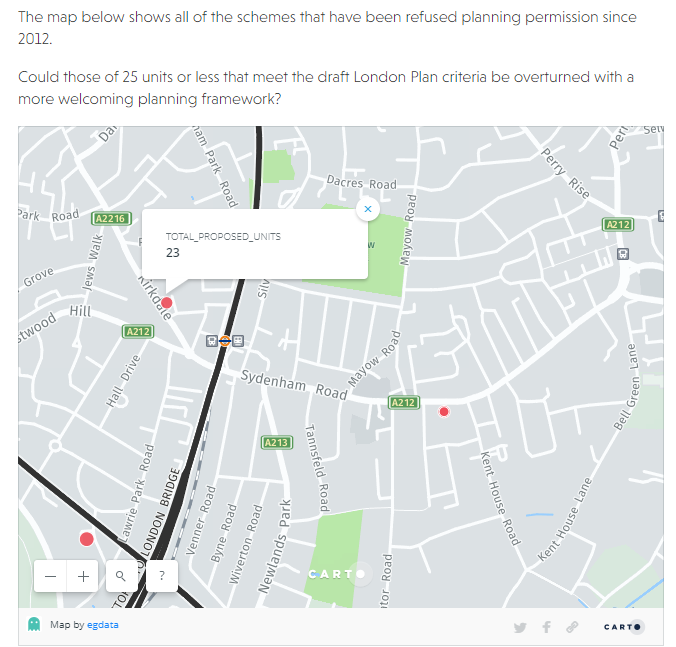 That refused 23 unit development was this one


Insufficient information has been submitted to demonstrate that the proposed
development would adequately mitigate against noise from existing commercial
premises within the application building, thereby resulting in a poor standard of
accommodation contrary Paragraph 123 of the National Planning Policy Framework
(NPPF) (2012). Therefore, pursuant with paragraph O.2(d) of Class O, Part 3,
Schedule 2 of the General Permitted Development Order 2015 (as amended 2016)
prior approval is required and refused.

Two public comments were received, both objections, but they are not published on line
Top

From the Syd Soc newsletter

"Regent House, to the rear of Cobbs, is the subject of an application to convert the existing office space to 14 studio flats.
This application has been submitted under recent government legislation which allows for the conversion of offices to residential units without the developer having to submit a planning application.
The Sydenham Society has put in a strong objection to this proposal, as in our view this important building merits a full
application and historical report. In addition, the proposed studio flats fall well below the residential space standards required by the London Plan."

Would be good to see something better come of that block soon.
Top

Biscuitman1978 posted this on it at the time